The WilliamsRDM START™ Sensor Network is a low power wireless mesh network intrusion detection system consisting of sensor nodes, cluster nodes, and a server application. The sensor and cluster nodes incorporate a suite of sensors to detect intrusions by people or vehicles as well as integrated GPS to locate intrusions. When the system is triggered, the detection is recorded, the User interface is updated. The system is also capable of triggering external and third party hardware like cameras, and other higher power systems.

Sensor Nodes can be placed along a perimeter of an area to be monitored or within the area itself. The sensor nodes form a wireless mesh network to communicate to one another and to the cluster node. Sensor nodes detect intrusions by changes in Radio Frequency signal strength between nodes, augmented by optional additional third party sensors. A multi-tiered filtering algorithm is also used to reduce/eliminate false detections.

Cluster nodes have additional processing capability to communicate and analyze data from up to 200 sensor nodes. They also have higher power radio transmitters for longer communication range. The cluster node sends fused data, data generated by combining multiple sources,  to the server application through satellite or other long range RF links.   The cluster node acts as a gateway combining data from multiple sensor nodes. The server application is responsible for further analyzing and then presenting node data  and intrusion location information via a web based map enabled Graphical User Interface (GUI). The server application GUI is web based, any device that has a browser and has access to the internet can securely view information. 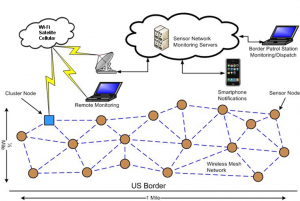 A unique advantage of the START™ Sensor Network system is its ease of deployment and low cost.  It is inherent reliability due to built in redundancy of its wireless mesh network. Nodes are rugged and can be deployed very quickly and easily.  The system is designed to use very little power, requiring only batteries and solar panels. Off the shelf solar panels can be used but if a Stealth deployment is required, our Covert Solar Power System is recommended.  All electronics and batteries are sealed in the enclosure with no openings and no moving parts. No maintenance of the deployed nodes is required.  Each node has a multi-year deployment life.  The system uses a very simple Radio Frequency “trip-wire” capability, augmented with other sensors, to detected intrusions and uses a multi-tiered configurable filtering system to eliminate false detections.