The START™ Server Application is a web server based software program that communicates with the START™ Sensor Network through satellite or other long range RF links and displays node and intrusion detection location information on a map enabled web page.   Sensor and cluster node GPS information is used to graphically display each node on the map in its deployed location.  Lines between sensor nodes depict the RF “trip wire” between each node. If an intrusion is detected by sufficiently changing the RF signal strength between nodes, the lines between the nodes will change color to visually see where the intrusion has been detected on the map.  If an intrusion is detected by other sensors on a sensor node, the sensor node graphic will change color and bounce in place to identify the location of where the intrusion has occurred on the map.  In addition to visual indicators, a log with GPS location, node information and date and time stamp of detections are displayed. 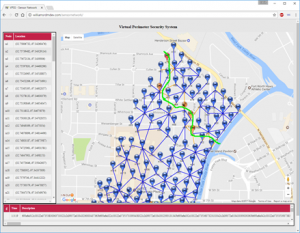 The START™ Server Application has the ability to geo-fence areas on a map to reduce the sensitivity of alarms in that area due to known friendly activity (farming, cattle, etc.), but increase the sensitivity of detections going into and out of the area.  Or, the geo-fenced area could be identified as a “hot spot” of increased surveillance, and the sensitive inside the geo-fenced area could be increased to ensure all activity is alarmed quickly.  In addition, geo-location based alerts can be configured such that if intrusions are detected within a certain radius around a border patrol agent, SMS text messages can be sent directly to the agent with the location of the incident for a quicker response.  Historical intrusion information may be archived and available for viewing graphically on a map in time-lapse mode to identify intrusion patterns to ensure resources are focused in critical areas.  An Over The Air (OTA) software download capability is available to update deployed sensor and cluster nodes to minimize maintenance costs and provide the ability to deploy software enhancements after nodes have been deployed.